When you think “pocket-knife” A LOT of different styles come to mind. They can range from the Boy-Scout friendly Swiss Army Knife or a utilitarian knife tool, even an up scale cutting tool that’s more for show than actual use. In essence, there are quite a few sub-categories (i.e. styles, usage, level of convenience…). The category we’re going to talk about is OTF knives.

A branch of automatic switchblades, when well made, these knives are quick, convenient, and in style. There may not be a wide variety like other styles out there but there is still quite a bit available. With that said, we’d like to introduce some of our OTF knifes.

What Exactly Are OTF Knives?

OTF stands for “Out-The-Front,” which is a handy label for what these knives actually are. You see, whilst folding blades (as their name suggests) fold in half, OTF knives don’t fold at all. Instead, the blade (when collapsed) is indeed housed inside the handle itself. When deployed, the blade is extended outward and into the open position via an automatic mechanism (also housed within the handle) — usually via a button or slider. Then, once finished with the cutting task at hand, the blade slides back into the handle for secure and safe carry until the knife is needed again. Sometimes referred to as telescoping or sliding knives.

Things To Look For

Standard practice with any gear purchase, there’s a few things you’ll want to look for. With an OTF knife, we mean more than just the normal things you’d watch for in an EDC (everyday carry) blade — e.g. blade steel, handle material… In fact, there are a few specs specific to OTF knives that are important to keep in mind. Read below:

Price: While price should be a determining factor in any knife purchase, the starting range is especially important for OTF knives. This is because their internal mechanisms are complex devices that require sound engineering and a sturdy construction — both in how they function and in their materials. Per se, OTF knives tend to be on the pricier side of the spectrum. In fact, we’d suggest staying away from anything that falls under a $150 point, there’s a solid likelihood that these knives are not well-built verging on being dangerous to the user. It’s worth noting that a low price is not always an indication of poor quality, but the risks (in this case) far outweigh the benefits. The last thing you want is for your OTF knife to fail and/or break when you need it most.

Mechanism: There are two things to look for in relation to the deployment mechanism of OTF knives. The first is whether or not the knife features a “double-action” mechanism (meaning the button or slider will both deploy the blade into the open position, as well as, retract the blade to the closed position). Not all OTF knives are double action; some will deploy the blade but then require manual retraction to close it again. This does not necessarily affect the overall value of an OTF knife, but it will make a difference in how it functions. Second, you’ll want to look for the position of the deployment mechanism. This is more personal preference than anything else, but some OTF knives have the deployment mechanism on the front of the handle, whereas others have a slider on the spine (which is the case for most OTF knives) or side of the handle.

Edge Type: In reference to OTF knives, what we’re specifically looking for is if the knife features a single-edge (S/E) or a double-edge (D/E). S/E are more well-suited to EDC usage, as users can place a thumb on the spine of the blade to increase pressure at the edge, which is helpful for utilitarian cutting tasks. However, D/E daggers are better for penetration and slashing — making them more aligned with fighting and combat knives and serving better for self-defense usage.

A Note On Legality

Because of the nature of OTF knives — which, legally, are a type of automatic switchblade — the laws regarding carrying them and/or using them are somewhat strict. In places where you might be allowed to carry a manual folding knife, you might not be able to legally carry an OTF knife. It is controversial but many governments view automatic knives (of any type) to be weapons first, especially when it comes to the OTF variety. So become educated on whether you can carry automatic knives at all, if the length is a determining factor, and/or the legality of any other defining features. If you choose to ignore the seriousness therein, you could face fines, confiscations, and even jail time. As far as we’re concerned, that is not a risk worth taking, so stay informed before you try to purchase and carry an OTF knife.

The Zhànshì (Warrior) OTF Knife is a full size fully automatic double action OTF (out the front) Knife that comes standard with CNC aviation aluminum handles. The all CNC construction of the Zhànshì makes for a precision fit & finish not only on the exterior of the knife but also on the inside operating components as well. Aviation aluminum is strong, lightweight and elegant in appearance and feel.

The Covert Reaver OTF Knife is a medium size fully automatic double action OTF (out the front) Knife that comes standard with CNC aviation aluminum handles. The all CNC construction of the Covert Reaver makes for a precision fit & finish not only on the exterior of the knife but also on the inside operating components as well. Aviation aluminum is strong, lightweight and elegant in appearance and feel. 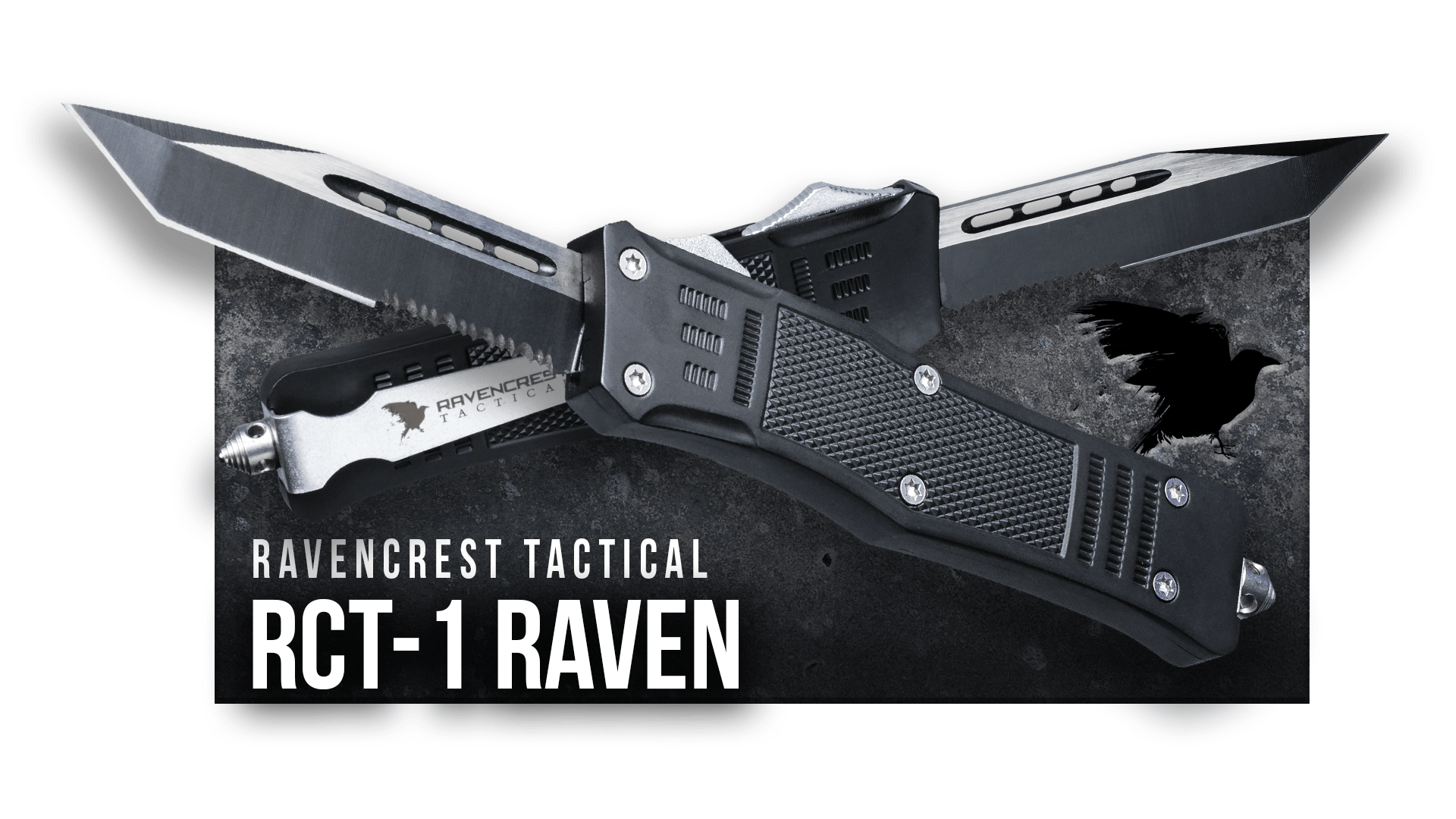 The RCT-1 Raven Double Action Out The Front Knife features a 440c Stainless Steel blade with a two tone matte black finish. The blade can be quickly deployed with the ambidextrous sliding button. Pushing forward on the button deploys the blade out the front of the handle and pressing backwards on the button retracts the blade back into the handle where it is ready again to be deployed at a moments notice. 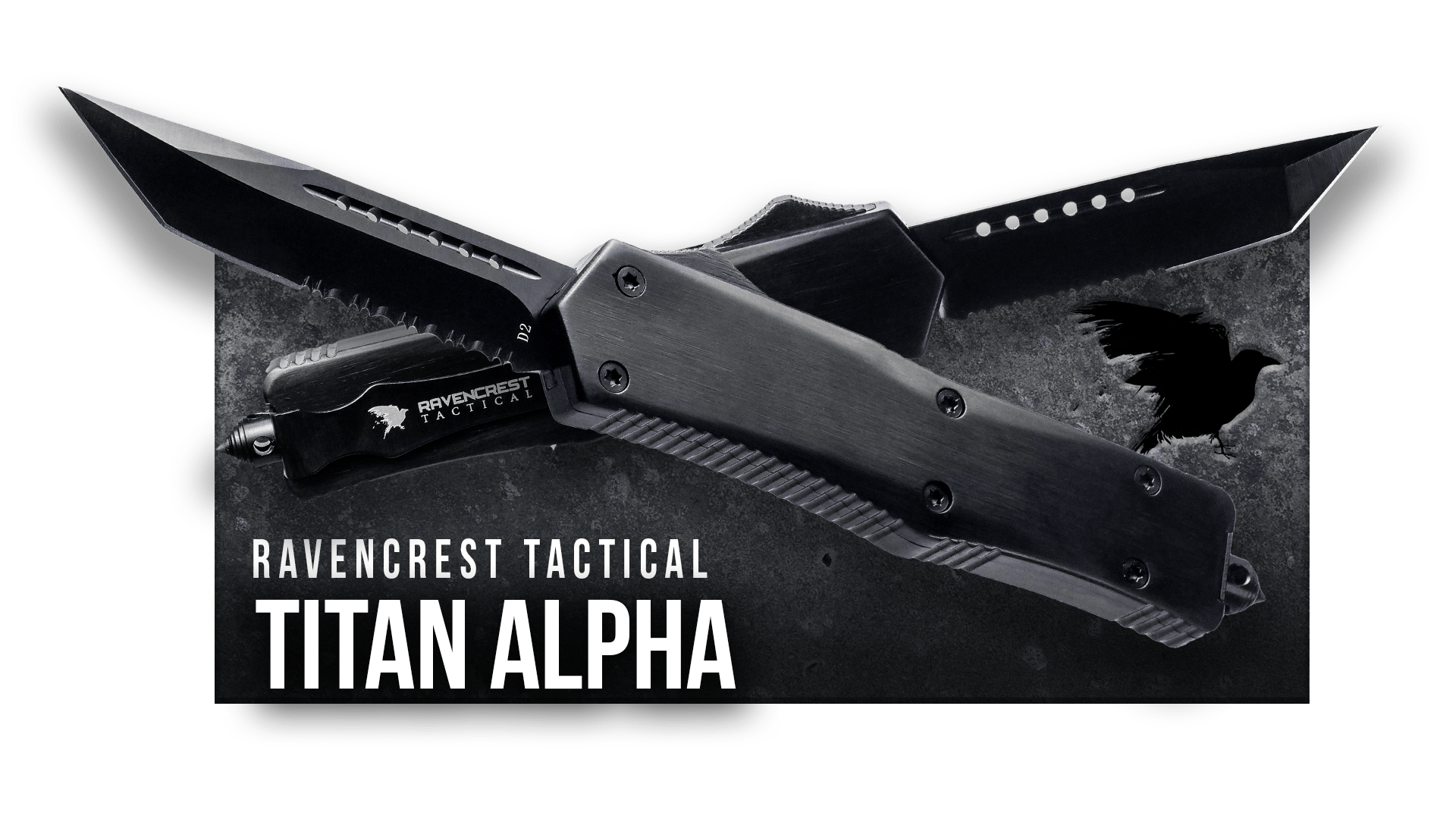 Each Titan Alpha comes standard with a 3.75-inch D2 Stainless Steel blade that is meticulously hand sharpened to a razor’s edge ready to cut right out of the box. The smooth ergonomic handles on the Titan are made of high-quality Zinc Alloy that has been CNC machined for precision fit and finish. The button placement along the spine of the handle allows for lighting fast ambidextrous openings right from the operators pocket. 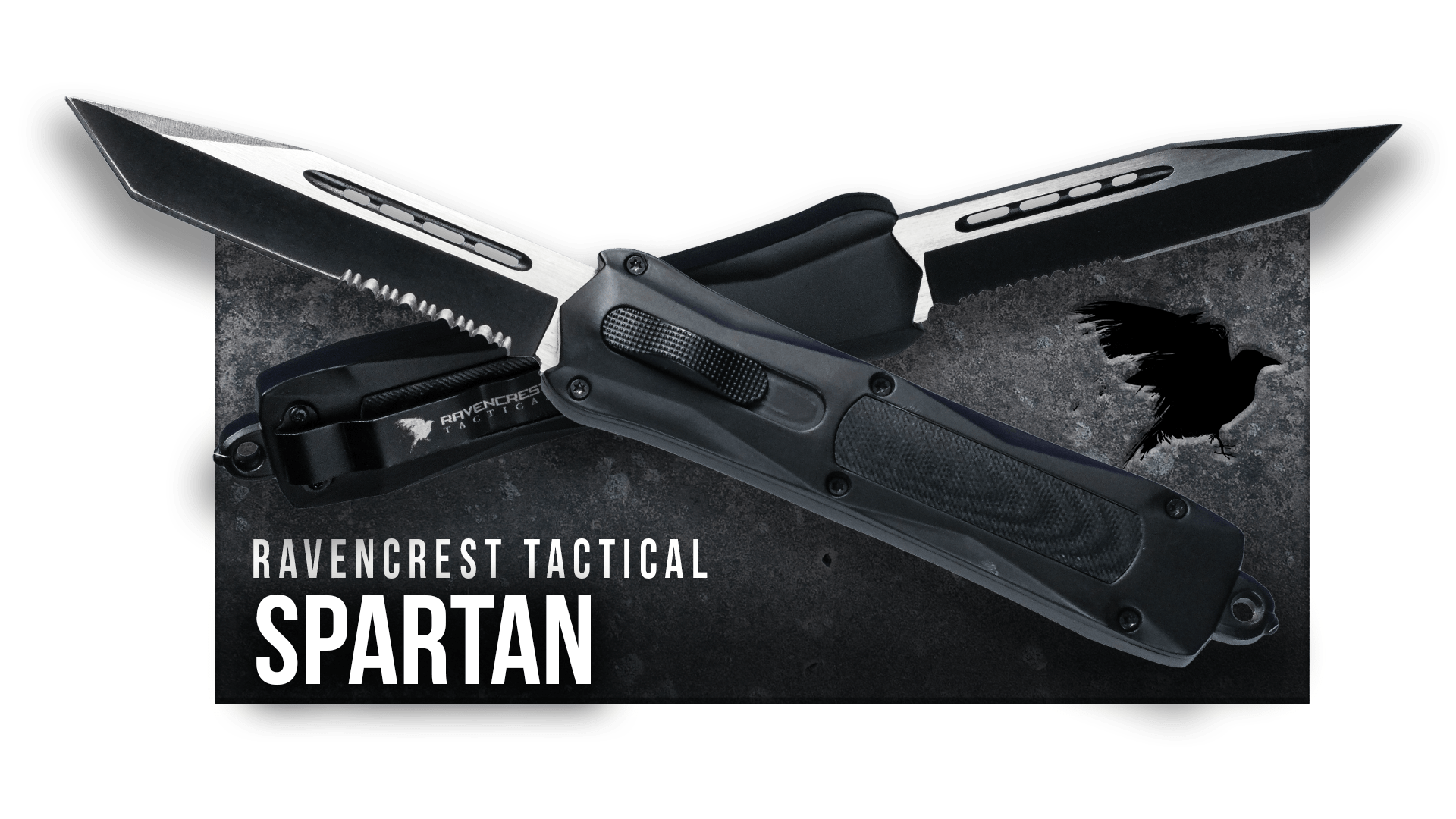 The Spartan is built for hard use. Each Spartan comes standard with a 3.9-inch 440c blade that is meticulously hand sharpened to a razor’s edge ready to cut right out of the box. The sleek ergonomic handles on the Spartan are made of high-quality Zinc Alloy that is individually hand coated with Cerakote which gives them maximum hardness and corrosion resistance. The button placement along the “face” of the handle allows for a natural thumb placement and leverage while deploying the blade. 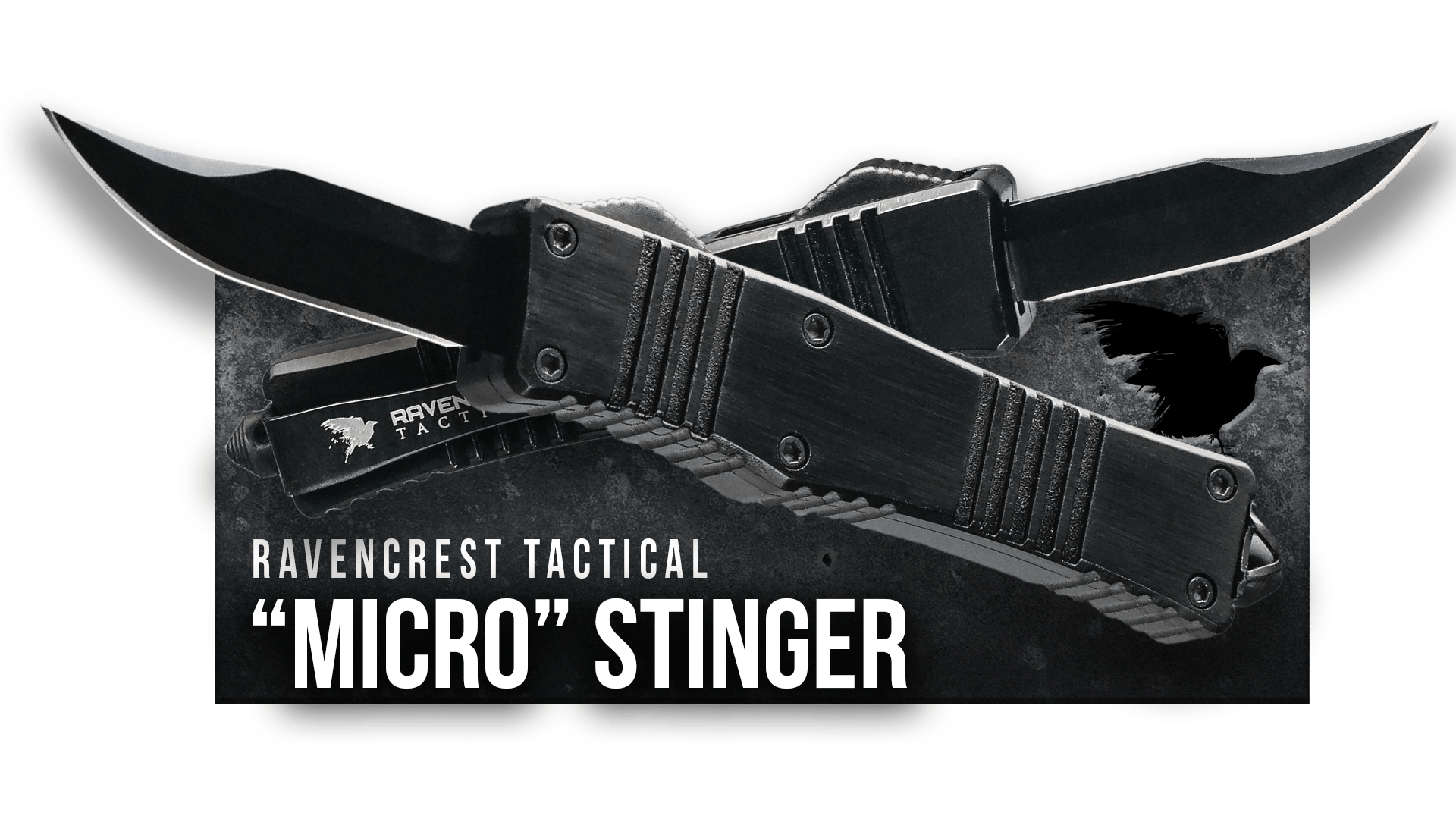 The Stinger “Micro” is a California legal fully automatic double action OTF (out the front) knife that comes standard with CNC machined “almost patina like” gunmetal handles and satin finish blade. The Stinger “Micro” Tactical OTF knife is the perfect all around “utility” knife. The Stinger also comes with a fully functional glass breaker. Sleek, small and lighting fast… There’s really no reason not to have one… or two. This may just become your new favorite tool. 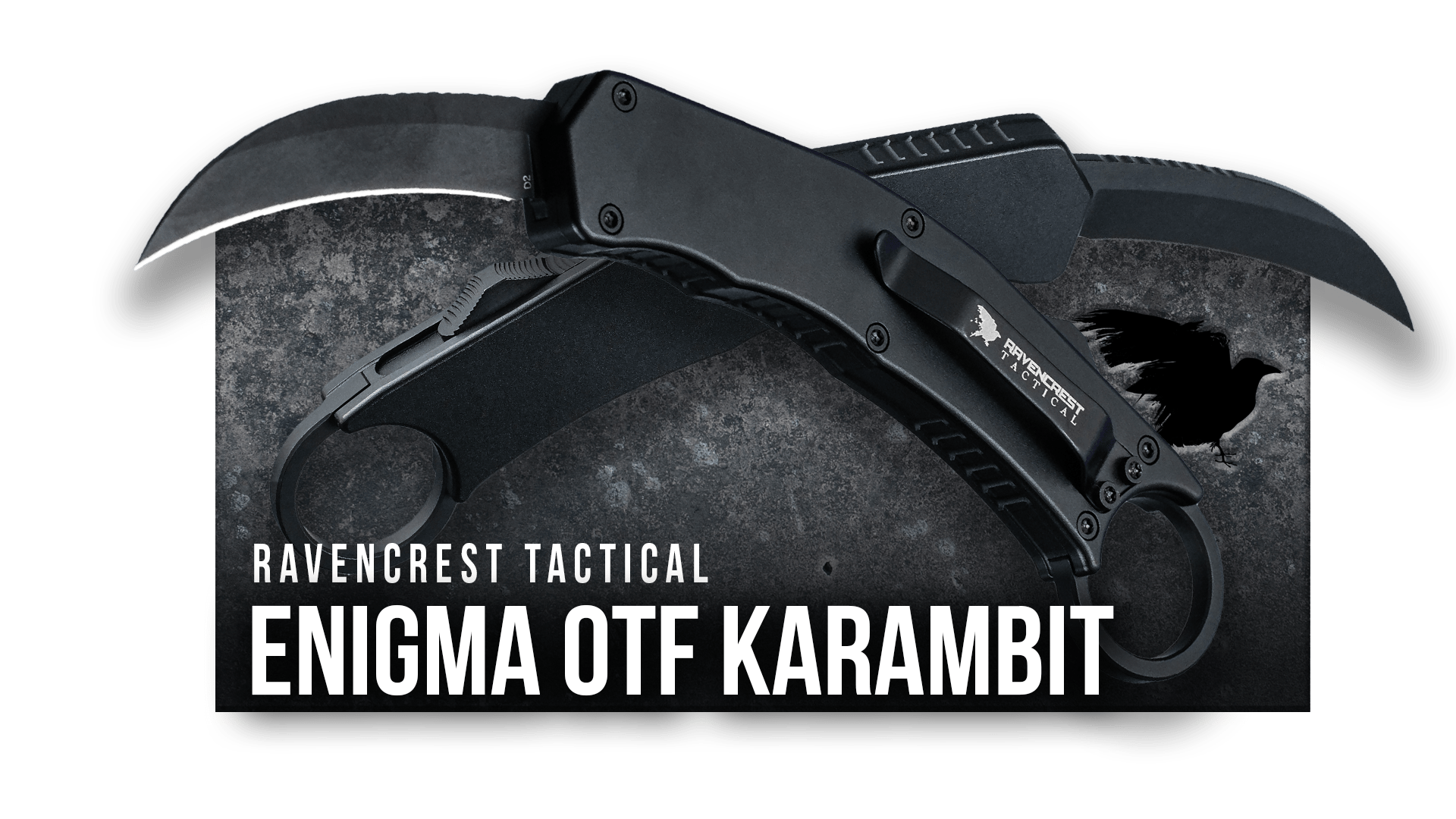 The Enigma OTF Karambit is a fully automatic double action OTF (out the front) Karambit knife that comes standard with CNC aviation aluminum handles. All CNC construction of the Enigma makes for a precision fit and finish not only on the exterior of the knife but also on the inside operating components as well. The aviation aluminum is strong, lightweight and luxurious in appearance and feel. The Enigma features a retention ring and allows for reverse grip deployment via its smart button configuration. The Enigma OTF Karambit is ergonomically designed to be comfortable in both reverse and forward grip applications becoming an extension of the operator.