There is no magic formula when it comes to making a decision about purchasing a OTF knife. There are so many OTF knives on the market today. Many are great products from trusted companies. So how do you know whats right for you? There are a couple of principles we here at Raven Crest Tactical believe you should follow when picking out your next trusted OTF knife..

What Will You Be Using Your OTF Knife For?

When it comes to picking out any new OTF knife you need to think about the purpose for which you intend to use the OTF knife. Will it be something to add to the collection or will it remain in the glove box of your car in case of emergencies? Will it ride along in your tool box at work or in your hunting bag? Will it be used for self defense or a utility blade for every day tasks? You must first understand its function before you can decide on which knife is the right knife for you. Once you have a good idea how you will be using the OTF knife, you can move onto the style of the OTF knife.

Though usually a matter of personal preference, blade size should be determined by the job for which it is intended and the way you plan to carry your knife. Typically, larger blades are used for outdoor and other heavy-duty applications, while smaller blades are appropriate for everyday tasks. Note: Prior to purchasing a knife, it is a good practice to check the laws in your state or country regarding legal blade sizes and lengths. 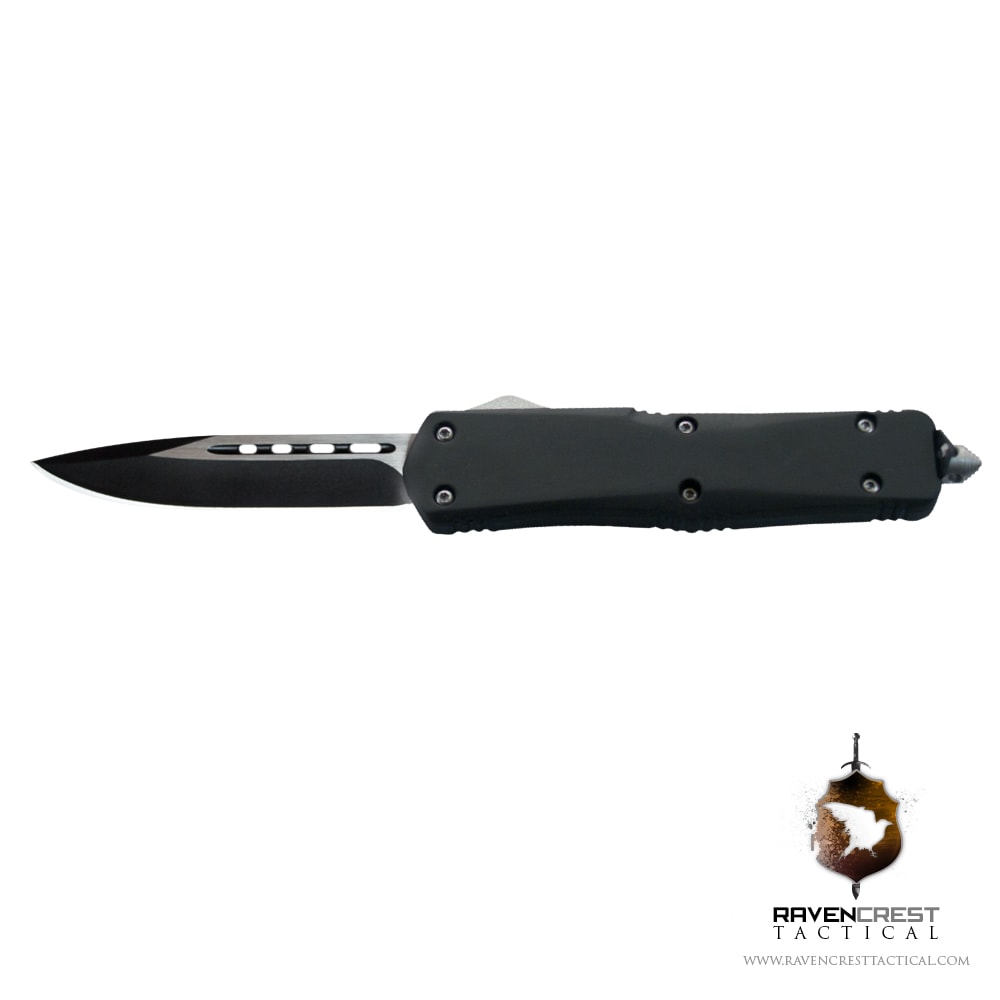 Straight Edge blades are the standard for general knives and cutlery. The ideal choice for hunting, the Straight Edge provides an edge that cuts cleanly and sharpens quickly and easily. 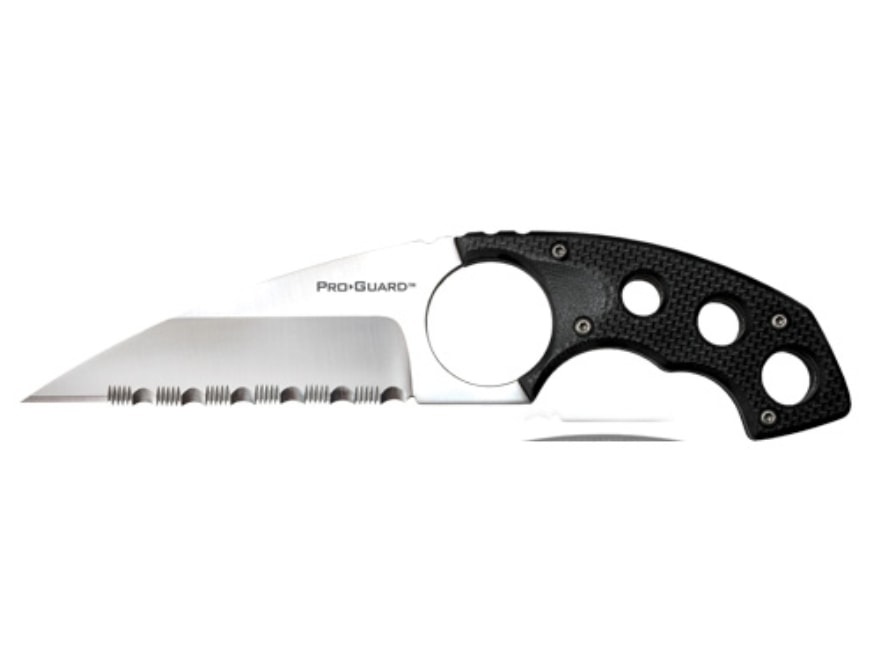 Fully Serrated blades remarkably outperform straight edges when cutting fibrous material, like rope. It is an aggressive edge and often leaves a ragged cut. Serrations typically will stay sharp longer than a straight edge but once dull, are much more difficult to sharpen. However, there are many systems today that make sharpening serrations easier.

Partially Serrated blades offer the advantages of both straight and serrated edges in one knife blade. A partially serrated edge is a good compromise when the blade will be used for general purposes. 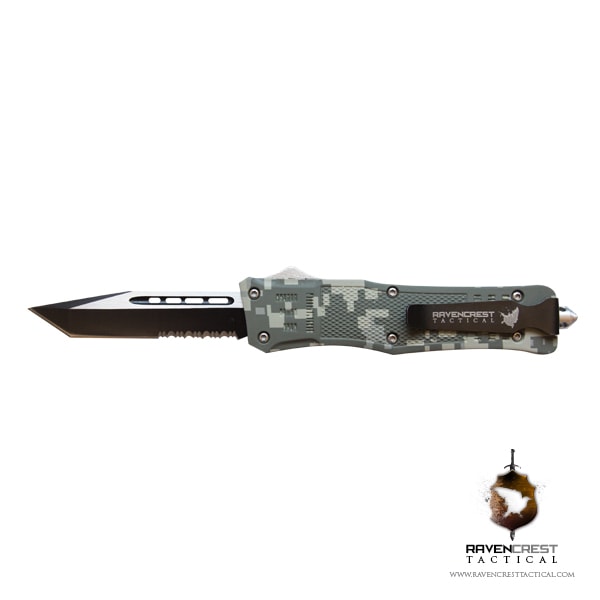 Tanto has become identifiable for its angular shape, using two straight edges that are joined. The Tanto tip is very strong due to the spine keeping its full width until it nears the tip, which then tapers to create the point. The Raven Crest Tactical Nemesis OTF Knife is an example of a Tanto blade.

Drop Point is a pattern used on many knives, commonly seen on hunting blades. The tip is lowered (dropped) via a convex arc from the spine to allow the tip to be ground thicker. This convex shape differentiates it from the clip point. The Raven Crest Tactical Titan Bravo is a good example of this style. 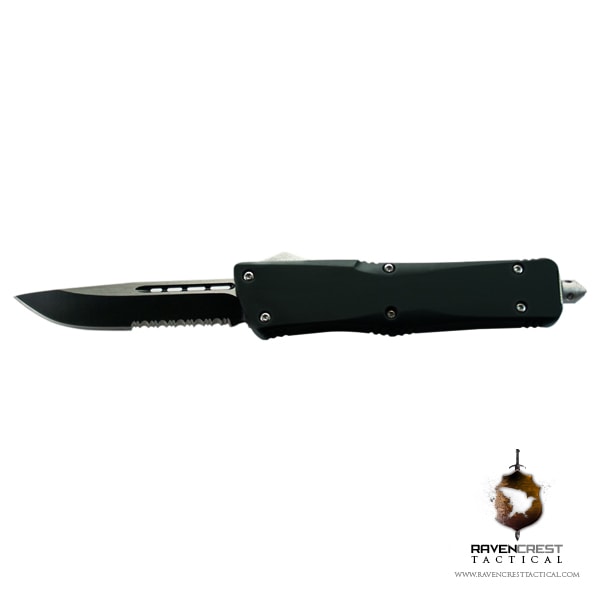 Clip Point is a great all-around format and one of the most popular, used on most bowie knives. The blade shape uses a concave or straight cutout toward the tip. The Raven Crest Tactical Jackal Alpha is a fine example of a clip point. 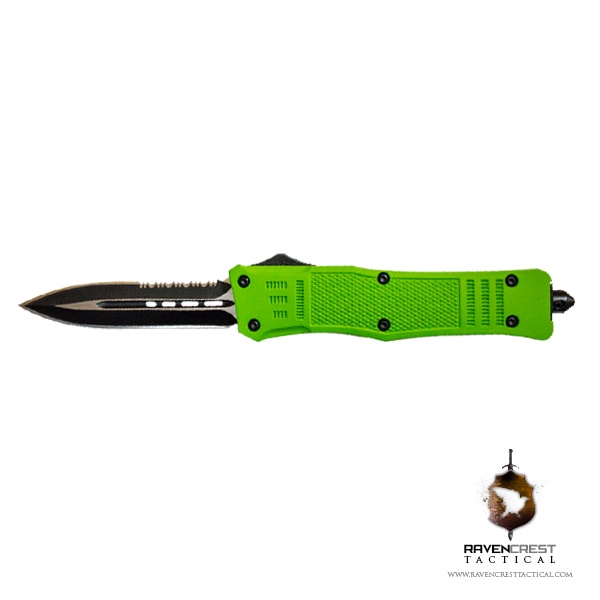 Spear Point is a symmetrical grind with the tip located at the blade’s center. Double-edged, the spear point shape makes for a great dagger. The Raven Crest Tactical Venom Bravo is an example of a spear point blade style.

There is a saying: The heart of a knife is its steel. While steel certainly is very important, it is not the only factor in determining the performance of a knife (other considerations being heat treatment and blade shape/profile). The level of steel quality varies greatly from knife to knife. Most modern knives, however, are made using stainless steel (a steel alloy with a minimum of 11% chromium content by mass). By varying the amount of chromium and carbon in the makeup of the steel, different properties are achieved.

Some basic information on steel grades and characteristics:

These entry-level, rust-resistant stainless steels are typically made in Asia and offer good value. Compared to higher grades, they tend to be softer and require more frequent sharpening to maintain the best performance, but do adequately hold an edge. EXAMPLES: 420, 440A, 7CR13MOV

Typically made in the USA and Japan, the best stainless steels come with a cost premium, due to their high chromium content. Additional elements, such as vanadium, are often added to provide superior edge sharpness and retention, as well as enhanced rust resistance. These steels are ideal for more demanding uses. EXAMPLES: CPM 154, S30V, VG-10

440A and 440C are high-grade cutlery steels that are very similar to AUS above. The 440A contains the least amount of carbon and is more stain-resistant than 440C, which contains the most carbon and is typically harder. Many knives are made of 440 stainless, due to its toughness and relatively low cost.

VG-10 is a well-known, high-end Japanese steel, and is considered premium. It contains vanadium, which is renown for its toughness. The steel is specially designed for high-quality blades used in cutlery. VG-10 can be sharpened to a fine edge that is very durable and can maintain a hardness of Rc 60 without becoming brittle.

CPM S30V is a powder-made stainless steel developed by Crucible Materials Corporation for its wear and corrosion resistance. Considered to be one of the superior steels ever made, its chemistry promotes the formation and even distribution of vanadium carbides, which are harder and more effective at cutting than chromium carbides. In addition, vanadium carbides give the steel a very refined grain, which further contributes to the sharpness and toughness of its edge.

D2 is a high-performance tool steel alloy commonly used in knives and tools. It is not considered stainless steel, as its chromium content is one percent less than the required classification.

8Cr13MoV is a Chinese stainless steel with a high performance-to-cost ratio, often compared to AUS-8. Tempered around the Rc56 to Rc58 range.