History of the Edged Tool : James Bowie and Sandbar Brawl

History of the Edged Tool : James Bowie and Sandbar Brawl

We are a knife company owned and operated by true knife junkies. We (as owners of Raven Crest Tactical) love all things knife related, especially knife stories and history. In this series we are going to share some historical / ceremonial / cultural and religious stories regarding edged weapons. Get ready because we are coming out of the gates hot with this series..

James Bowie and the Sandbar Fight

James Bowie, that name may sound familiar to some.. Ever heard of the “Bowie Knife”, here is what one looks like:

Well James Bowie created the Bowie Knife and here is what James Bowie looked like, you know he is serious business because of those monster mutton chops: 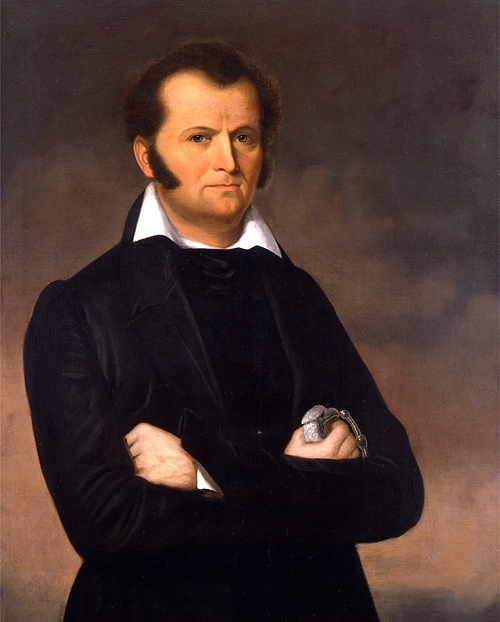 What you may not know is the truly epic knife fight that took place between James Bowie and Major Norris Wright. Now when I say epic, I am not just throwing that around loosely, James Bowie was as tough as coffin nails.

Let’s dive in and find out why….

To put this In modern day terms, James Bowie was a Green Bay Packers Fan and Major Norris Wright was a Chicago Bears fan and they both went to watch their team play each other.  With about 16 other fans.

The duelists each fired two shots and missed, and as neither man was injured they resolved their duel with a handshake.

In case you didn’t catch that, both duelist got their shot off at each other, both duelists missed, both duelists then shook hands and considered their issue resolved. At this point the story should be over, but oh no, this is where it starts to get good.

In my mind at this point in the story the people who showed up to this duel were disappointed at the results. I think they were restless and wanted to see some blood shed (again this is banter, but it makes sense if you think about it). Come on people, think back to Junior High or High School fights.. Everyone there is so amped up, they want to see carnage, they want to see their “buddy” win… What these people got wasn’t carnage, they got a handshake.

As both duelists turned to leave, Bowie came forward to meet them. Seeing this, Maddox’s friends ran forward to join the group. Two men in this group had previously fought and still had an ongoing issue to settle. Man one is named “Cuny” and man two is named “Crain”. Crain, is recorded as having called out to Cuny, “Col. Crain, this is a good time to settle our difficulty.” After that, Crain drew his weapon and fired, missing Cuny but striking Bowie in the hip and knocking him to the ground. Cuny and Crain then exchanged fire, with Crain sustaining a flesh wound in the arm and Cuny dying from a shot to the chest.

Let’s stop one more time and just evaluate what happened…. Both duelists, who’s issues are now settled are shaking hands and Bowie comes forward to meet them. Who knows why, but what this does is put Bowie right in the middle of another “unsanctioned” duel that is about to go down between two other guys who were also attending the duel. The first duelists fired and missed his intended target, but instead hit Bowie in the hip. The second duelists fired and killed the first duelist who struck Bowie.  What Bowie did next is what has made him a legend… 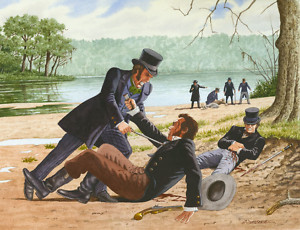 Bowie, rising to his feet, drew his knife and charged at the remaining duelist, who struck Bowie so hard on his head with his empty pistol that it broke the pistol and sent Bowie to his knees. Then, at that moment, Major Norris Wright appeared (remember he was the guy who was rooting for the other team), drew a pistol, and shot at the fallen Bowie, missing. Wright then drew his sword cane and stabbed Bowie in the chest, but the thin blade was deflected by Bowie’s sternum. As Wright attempted to pull the blade free, Bowie reached up, grabbed his shirt, and pulled him down upon the point of his Bowie knife. Wright died quickly, and Bowie, with Wright’s sword still protruding from his chest, was shot again and stabbed by another member of the group. As Bowie stood, pulling the sword cane from his chest, two more men fired at him, and he was struck once in the arm. Bowie spun and cut off part of one of men’s forearms.

I don’t even know where to begin. Let’s just try to paint the entire picture here: You have a bunch of amped up men who were just disappointed by the duel they came to see. They paid good money to travel to see two guy shoot and kill each other. That didn’t happen at all. In the midst of the crowds breaking up, two guys who have beef with one another realize that they are both in the same spot, and that spot it hot. Now I am sure that they had friends in each one of their ears pumping them up. They were probably mean mugging and talking trash to each other (relative to their time of course). Well it eventually got real and they decide that they were just gonna settle their issues right there and right now. They didn’t even wait for people to get out of the way, they just pulled their pieces and started firing. Hence, James Bowie gets accidentally shot in the hip. Well that seemed to really anger James Bowie and I can fully understand why. All he wanted to do was support his buddy and then all of a sudden some fool shoots him in the hip. And back then it wasn’t like he could just call 911 and get to a hospital or Urgent Care. Getting shot back then was serious business. From there James Bowie turns into a 1800’s version of Chuck Norris and just annihilates everyone in his path, with just his knife.

The Battle of the Sandbar lasted more than 10 minutes, leaving 2 dead, and another four wounded. But believe it or not, James Bowie was not part of the 2 dead. Even after being shot numerous times and stabbed in the chest with a cane sword, James Bowie still went Beast Mode on his attackers and lived. One of the doctors who treated Bowie’s wounds went on record saying this: “How he (Bowie) lived is a mystery to me, but live he did.”

So if you are ever in a discussion about who is the baddest mad don’t forget about James Bowie and battle at the Sandbar.