It has been a busy few years in the world of knife laws / de-regulations…. Thanks to the works of fine organizations like Knife Rights (kniferights.org), there have been many states that have overturned their ancient laws regarding knives and OTF’s. This has allowed us as a company to travel and share our awesome product to more states than ever before. If you are not already a member of Knife Rights, then we highly encourage you to join their efforts.. Here is what they have done for the knife community in just the last 2 years: 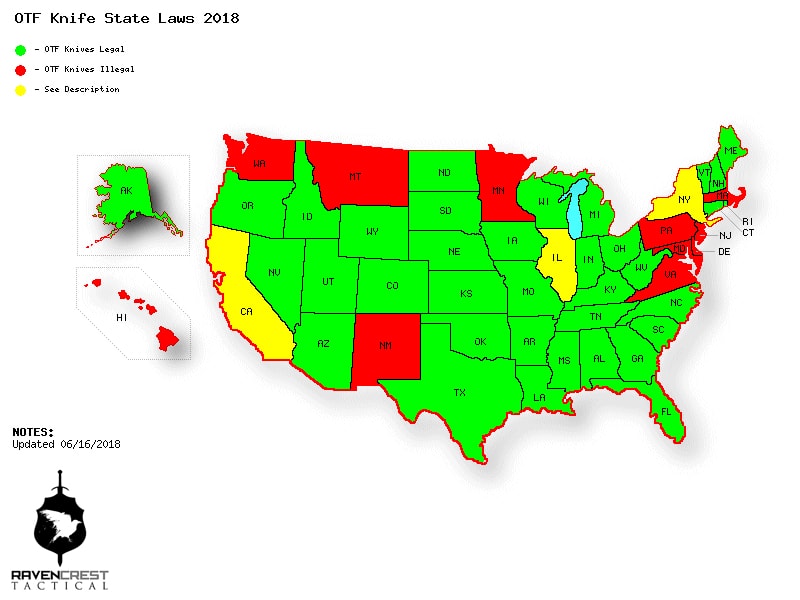 Not true. Most laws about non-firearm weapons are by state, with very few existing at the Federal level. Currently, the only country-wide law about switchblades is US Code Title 15, Chapter 29, and this law only controls the importation of these knives into the US, and the sale over state lines. It has no effects on buying, owning or carrying switchblades. Such is left to the states. The majority of states allow legal ownership of switchblades, but a few do not. Many have prohibitions on the sale of them, and most have laws against carrying them concealed. But some states such as Vermont and Utah have no restrictions on them.

The following is a comprehensive compilation of the laws on switchblades (also called automatics or OTF Knives) in the United States. This chart covers both overall federal law and each state law. These laws are for non-law enforcement citizens, as nearly all laws contain some sort of exemption for police. In states where unlawful intent must be proven (and is not simply presumed) for the knife to be illegal, this chart counts this as “legal.”

Possession = Refers to the legality of merely owning or having direct control over a switchblade, even if kept at home. Sale = The legality of merchants and private citizens offering switchblades for sale or selling them. Usually includes any transfer of ownership, even gifts. Note that such laws almost always only affect the seller; no state law affects the buyer of such a transaction. Open Carry = legality of carrying a switchblade unconcealed and in plain view of others. Concealed Carry = legality of carrying a switchblade in a concealed manner on one’s person(or most of the time, in a car). Balisong considered same thing? = Refers to if the wording of the law considers switchblades and balisongs to be the same thing. If “Yes,” balisongs are subject to all the same restrictions as switchblades listed for that state. If “no” they are covered by a separate law and may or may not be legal. Blanks indicate the state has no laws about either.

If possession itself is illegal, then all others become illegal by default. If possession is legal, but sale is not, it effectively becomes impossible to legally obtain a switchblade from within that state (since federal law prohibits inter-state sale). One must physically travel to another state to legally purchase.

Below are your answers….

*New York’s state law provides an exception for “Possession of a switchblade or gravity knife for use while hunting, trapping or fishing by a person carrying a valid license.” Whether this affects sale or type of carry is unclear.