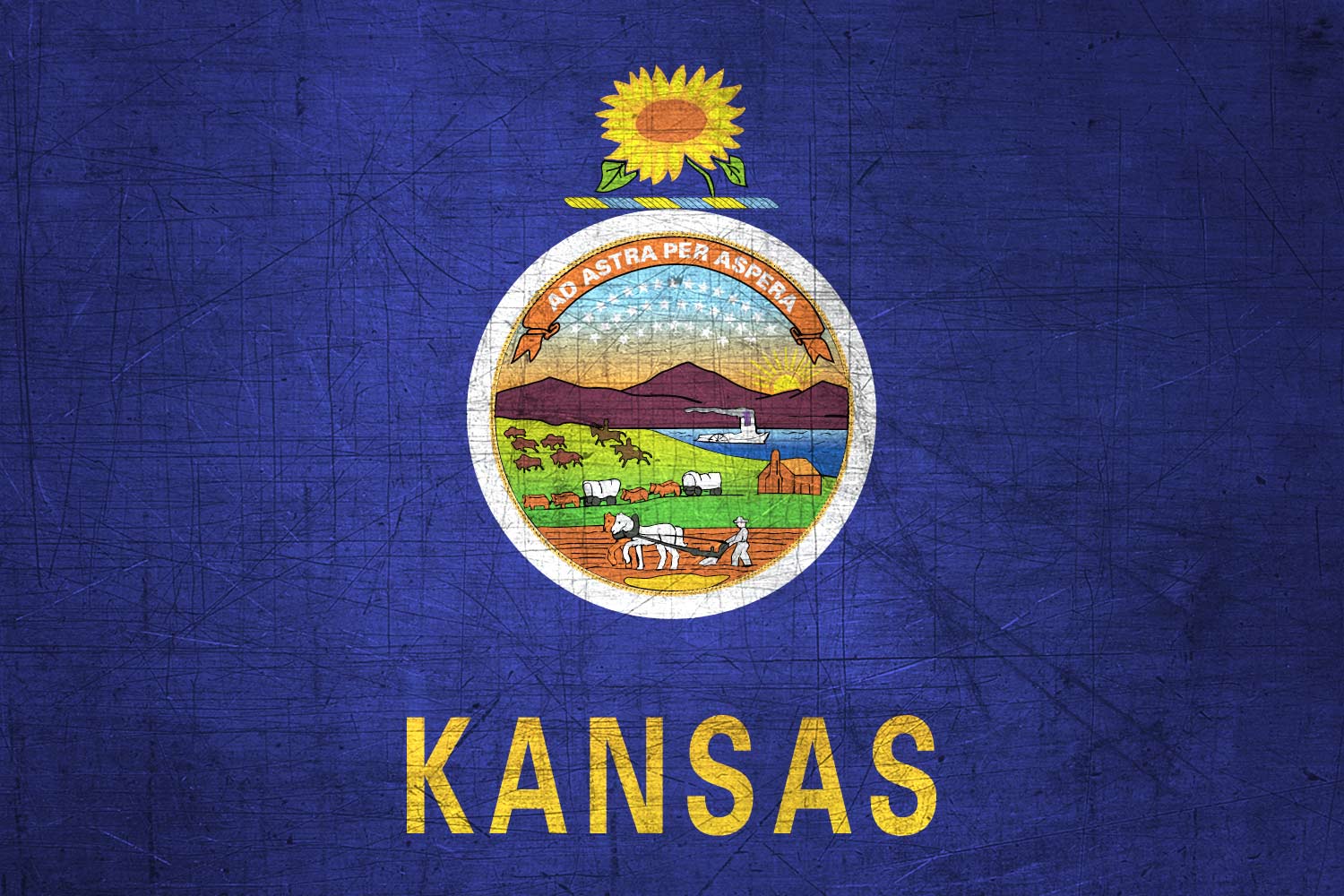 There are no restricted knives under Kansas state law.

A person may carry a knife, concealed or unconcealed, regardless of the length of the blade.

21-6301. Criminal use of weapons
21-6302.Criminal carrying of a weapon (does not apply to knives)
21-6304.Criminal possession of a firearm by a convicted felon (also applies to knives)
12-16.134. Knives and knife making components; regulation by municipality, limitations

The legislation which causes the changes to sections 21-6301 and 21-6302 preemption of knife law but does not apply retroactively. In pertinent part, 12-16.134 provides:

(a) A municipality shall not enact or enforce any ordinance, resolution, regulation or tax relating to the transportation, possession, carrying, sale, transfer, purchase, gift, devise, licensing, registration or use of a knife or knife making components.

(c) Any ordinance, resolution or regulation prohibited by either subsection (a) or (b) that was adopted prior to July 1, 2014, shall be null and void.

Restrictions on the manufacturing and commerce of automatic knives were removed in 2013.

Concealed carry of knives is allowed.

Kansas knife law changed significantly in 2013. The changes included the repeal of portions of 21-6301. Criminal use of weapons and 21-6301. Criminal use of weapons; along with enactment of 12-16,134. Knives and knife making components; regulation by municipality, limitations, which provides for, among other protections, preemption of local regulation.

The effect of the 2013 changes on 21-6301 was the elimination of the restriction on manufacturing, purchasing, and selling of “switchblade” knives.

The changes to 21-6302 included removing the prohibition on carrying an automatic or gravity knife; and removing all existing statewide restrictions as to the concealed carry of knives.

The net effect is that there are no statewide restrictions that generally apply to the possession and or carry of knives – defined as “a cutting instrument and includes a sharpened or pointed blade.”

Kansas is among the states that restrict the possession of “weapons” by persons who have been convicted of a felony. 21-6304. uses the word “firearm” in the caption, but the restrictions also apply to a knife which for purposes of 21-6304 is defined as:

‘Knife’ means a dagger, dirk, switchblade, stiletto, straight-edged razor or any other dangerous or deadly cutting instrument of like character. . .

A decision by the Kansas Supreme Court in July 2020, State v Harris, held that part of that definition is unconstitutionally vague and therefore void.

The issue of vagueness involves two elements or perspectives. From the viewpoint of citizens, compliance – people of common intelligence must not necessarily be required to guess the meaning of a statute. From the perspective of police officers, judges, and juries, enforcement – does the statute provide explicit standards?1

The focus of the Kansas Supreme Court in State v Harris was upon the enforcement element:

It is appropriate to call such clear-but-overbroad laws ‘vague’ because by failing to provide adequate enforcement guidelines, the Legislature has left it up to other actors to give the law teeth through their enforcement decisions and actions. As Justice Robert Jackson once wrote, without clear legal standards to guide us, we human beings ‘usually end up … condemning all that we personally disapprove and for no better reason than that we disapprove it.’  Within constitutional boundaries, legislators have this liberty. This is by design. Prosecutors, judges, law enforcement officers, and juries—that is, actors constrained by the law—do not have such freedom. This, too, is by design. Whether or not a person is arrested, charged, and convicted for violating a law must depend more on objective and discernable legal rules than on the mere discretion, guesswork, or whim of government officials. . . ‘Only the people’s elected representatives in the legislature are authorized to ‘make an act a crime.’ (Citations omitted)

Christopher Harris, a convicted felon was observed by police to be in possession of a pocket-knife with a blade of 3 and ½ inches. He was charged, and found guilty, of possessing ‘a deadly cutting instrument of like character’ to that of a ‘dagger, dirk, switchblade, stiletto, straight edged razor.’

The Kansas Supreme court noted the lack of any statutory guidance as to what would be included – or excluded – by the words “dangerous cutting instrument of like character”:

It is undisputed that Harris did not possess a firearm, a dagger, a dirk, a switchblade, a stiletto, or a straight-edged razor. In these circumstances, enforcement officials must ask, what exactly is a dangerous cutting instrument of like character? We are unable to discern a sufficiently objective standard of enforcement in this language. Instead, we are left with the subjective judgment of the enforcement agencies and actors. A pair of scissors? Maybe. A safety razor blade? Perhaps. A box cutter? Probably, but would that decision be driven by an objective rule or a historically contingent fear of box cutters? Johnson, 135 S. Ct. at 2557 (‘We are convinced that the indeterminacy of the wide-ranging inquiry required by the residual clause … invites arbitrary enforcement.’).

It remains unlawful in Kansas for a convicted felon to possess a firearm, dagger, dirk, switchblade, or stiletto. Only the residual clause of the 21-6304 has been held as unenforceable.