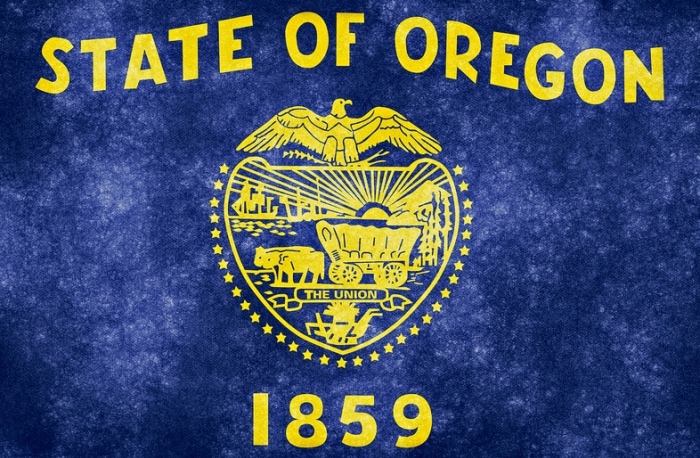 Concealment is a factor. The law prohibits the concealed carry of certain knives.

Knives are prohibited on all schools.

There are no knives that may not be lawfully owned or possessed in Oregon.

The basic restrictions pertaining to the carry of knives in Oregon are covered in 166.240. It prohibits the concealed carry of any knife having a blade that projects or swings into position by force of a spring, or by centrifugal force and any dirk, dagger, or ice pick. The restriction has been interpreted as applying to assisted opening knives and butterfly knives.

A location-based limitation, 166.370, prohibits the possession of any knife in public buildings and court facilities except for an ordinary pocket knife having a blade less than four inches in length.

While there is no knife-specific preemption statute, Oregon law restricts local ordinances which are “incompatible with the legislative policy, either because both cannot operate concurrently or because the legislature meant its law to be exclusive.”

Yes. Possession of dangerous weapons is prohibited in public buildings which include schools K through university, court/judicial facilities, government buildings, and other specified locations.

1) Except as provided in subsection (2) of this section, any person who carries concealed upon the person any knife having a blade that projects or swings into position by force of a spring or by centrifugal force, any dirk, dagger, ice pick, slungshot, metal knuckles, or any similar instrument by the use of which injury could be inflicted upon the person or property of any other person, commits a Class B misdemeanor.

There is no statutory or legislatively established guidance for determining what is concealed. The test used in Oregon was announced in the case of Oregon v Turner, 193 P3d. 697 (2008): a person violates 166.240 by carrying on his person a weapon that is either not readily identifiable as a weapon or by attempting to obscure the fact that he is carrying a weapon on his person. Debatably, if a folding knife with a pocket clip is clipped to the hem of a pocket, leaving part of it “identifiable,” there may be no attempt to obscure the knife as might be the case if the same knife is deposited in a pocket. There is no case law support in Oregon for this argument or on this issue. We suggest pocket clip carry as compliant with 166.240.

Oregon case law does suggest that a knife carried in a sheath at the waist is not concealed:

Like a gun in a holster, a knife carried openly in a sheath on the belt is not ‘concealed.’ Cf. State v. Walton, 18 Or. App. 603, 526 P.2d 458, rev. den. (1974) (affirming on other grounds defendant’s conviction for carrying a knife in a scabbard at the waist, but concealed beneath his coat). Once the officer discovered that defendant carried his knife openly in a sheath at his waist, he no longer had reasonable suspicion, let alone a probable cause, to suspect the defendant of wrongdoing. Oregon v Johnson, 772 P.2d 426 (1989)

(1) Any person who intentionally possesses a loaded or unloaded firearm or any other instrument used as a dangerous weapon, while in or on a public building, shall upon conviction be guilty of a Class C felony.

(2)(a) Except as otherwise provided in paragraph (b) of this subsection, a person who intentionally possesses:

(B) A weapon, other than a firearm, in a court facility may be required to surrender the weapon to a law enforcement officer or to immediately remove it from the court facility. A person who fails to comply with this subparagraph is guilty, upon conviction, of a Class C felony.

This section includes an “intent” element which is defined in 161.085. as follows:

(7) ‘Intentionally’ or ‘with intent’ when used with respect to a result or to conduct described by a statute defining an offense, means that a person acts with a conscious objective to cause the result or to engage in the conduct so described.

Seemingly, one who unintentionally or inadvertently enters a public building while in possession of a dangerous weapon would not be in violation of this section. It should also be noted that while one who intentionally enters a court facility will be charged with a violation, one entering with a knife or non-firearm weapon may be required to surrender the weapon or remove it from the facility. A violation will be charged if one fails to so comply. Another interesting aspect of 166.370 per sub part (3) (g) is that the provisions of section (1) pertaining to dangerous weapons in public buildings does not apply to someone with a concealed hand gun license. This provision does not apply to court facilities and provides that possession of a valid license is an affirmative defense.

Definitions that are specific to this topic are provided in 166.360. The following sub parts are relevant:

(9) “Public building” means a hospital, a capitol building, a public or private school, as defined in ORS 339.315, a college or university, a city hall or the residence of any state official elected by the state at large, and the grounds adjacent to each such building. The term also includes that portion of any other building occupied by an agency of the state or a municipal corporation, as defined in ORS 297.405, other than a court facility.

(b) Any dirk, dagger, ice pick, slingshot, metal knuckles or any similar instrument or a knife, other than an ordinary pocketknife with a blade less than four inches in length, the use of which could inflict injury upon a person or property;

By its terms, 166.240. does not apply to peace officers. There are various exceptions for law enforcement, judicial and other state officials under 370.166, as well as exceptions for U.S. Military acting in the course and scope of their duties.

Violations of 370.166. Possession of firearm or dangerous weapon in public building or court facility, is a Class C felony, and as such, carries a maximum penalty of up to five years imprisonment and a fine of up to $ 125,000.