101 Ways to Use a Knife : Knife Throwing

101 Ways to Use a Knife : Knife Throwing

Knife throwing is not only a useful skill to know for survival purposes, but it is also extremely challenging and fun. In this article we are going to go over some knife throwing fun we had with one of our Nemesis OTF knives. Because of the weight of our knife, we wanted to try the “no spin” knife throwing technique. Here was our results

Here are a few things to keep in mind regarding our shoot:

First, the thrower (co-owner Nate Mirand) had no proper training in how to “no spin” throw a knife or any other knife throwing technique. This was the first time he had ever thrown a knife. The techniques used were quickly learned off of the internet the same day as filming.

Second, the knife being used isn’t a brand new, out of the box knife. It is Nate Mirand’s personal OTF knife that he carries with him everyday. There was nothing different about this particular knife compared to any other Nemesis OTF we could have pulled off the shelf. This OTF wasn’t “beefed up” or modified in any way, it is a stock Nemesis OTF with a black out kit. This knife is 2 years old, gets used every single day, has only been sharpened once, and has been used in many of our torture test videos.

If you are familiar with knife throwing then you know that the no spin technique has a little bit of a unique grip.

First the handle is not held in the usual manner, it is held between the index finger and thumb, as near to the end of the handle as possible. 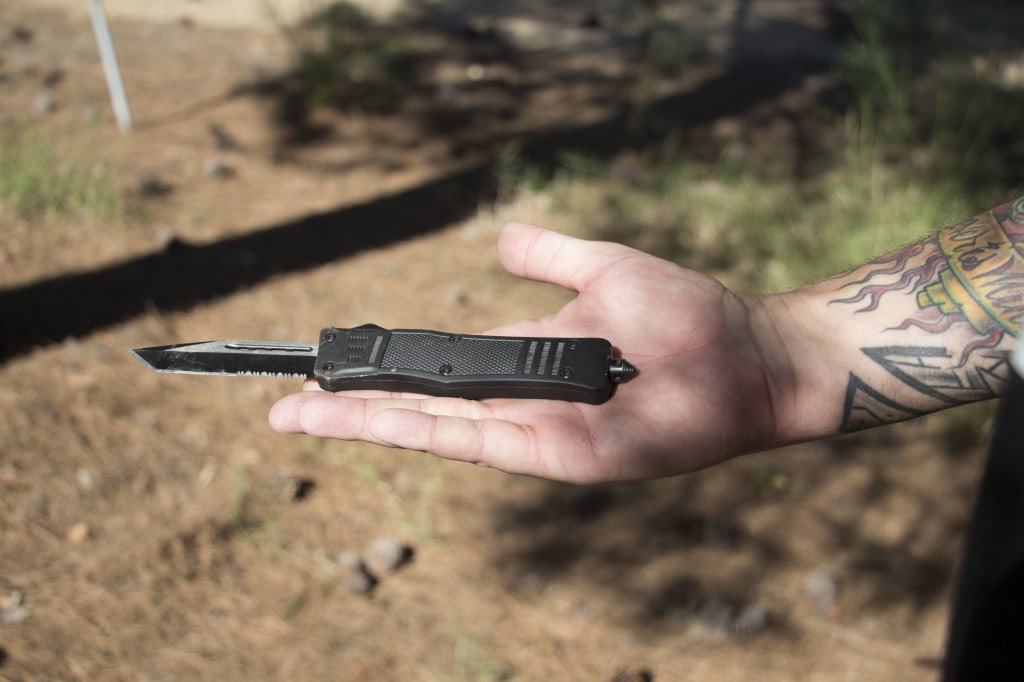 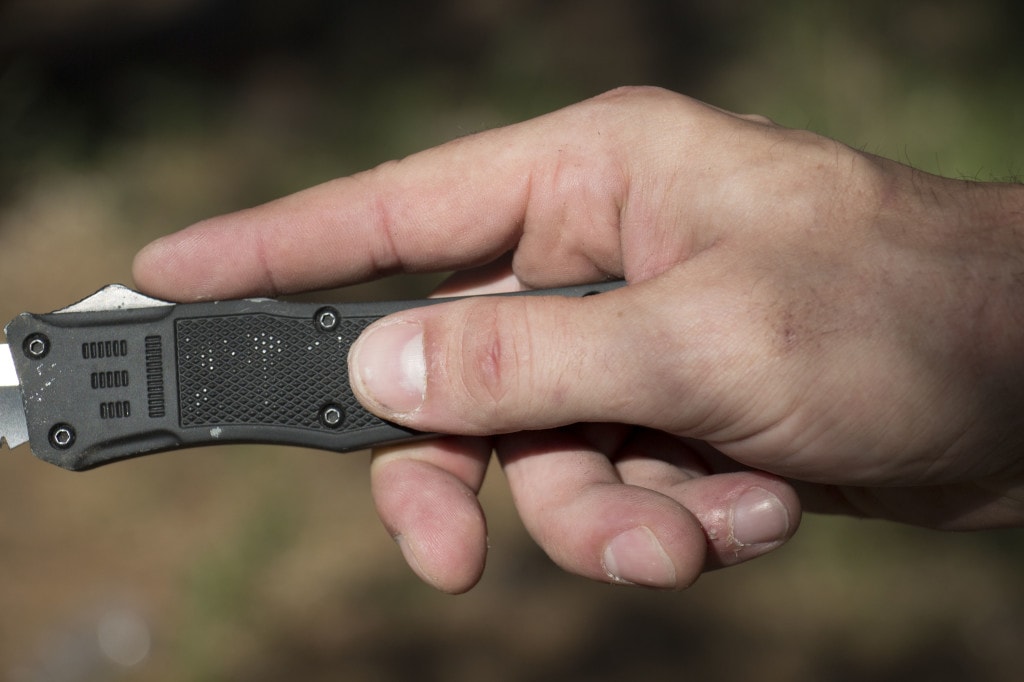 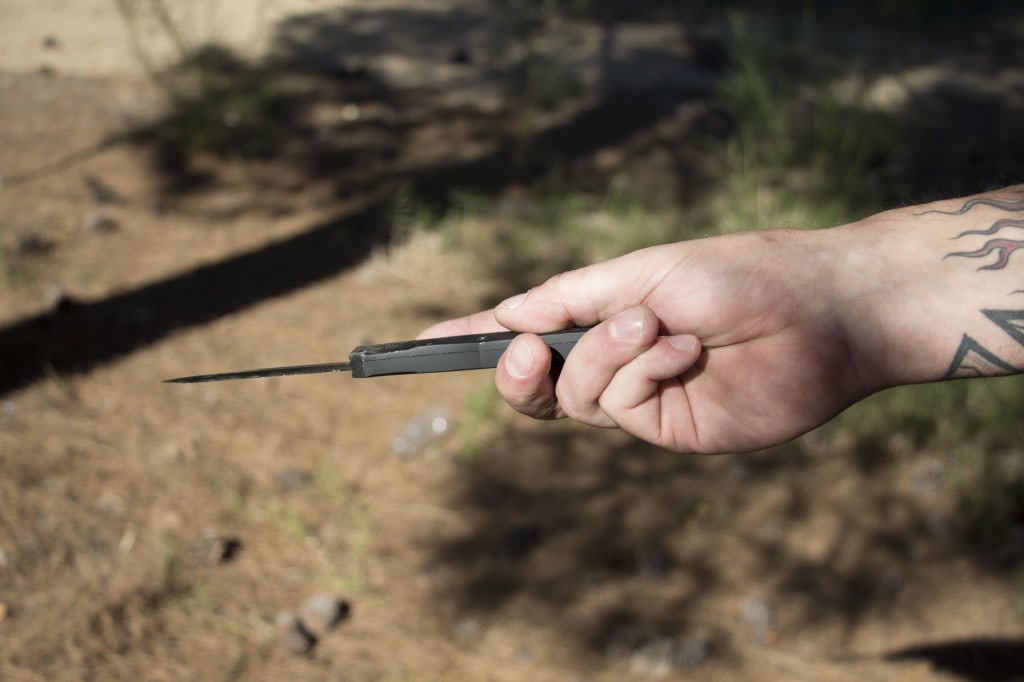 Your stance and balance should be solid, but relaxed until you are ready to make your throw. Nate is right-handed so his left leg is in front as the lead leg. His right leg is behind, but not so far back as to lose momentum or balance. Both feet should be about shoulder width apart. When you throw the knife, the follow through is all-important. Remember, its the forefinger that controls the knife, press it tightly along the handle and try to wipe it along the handle top as the knife goes. 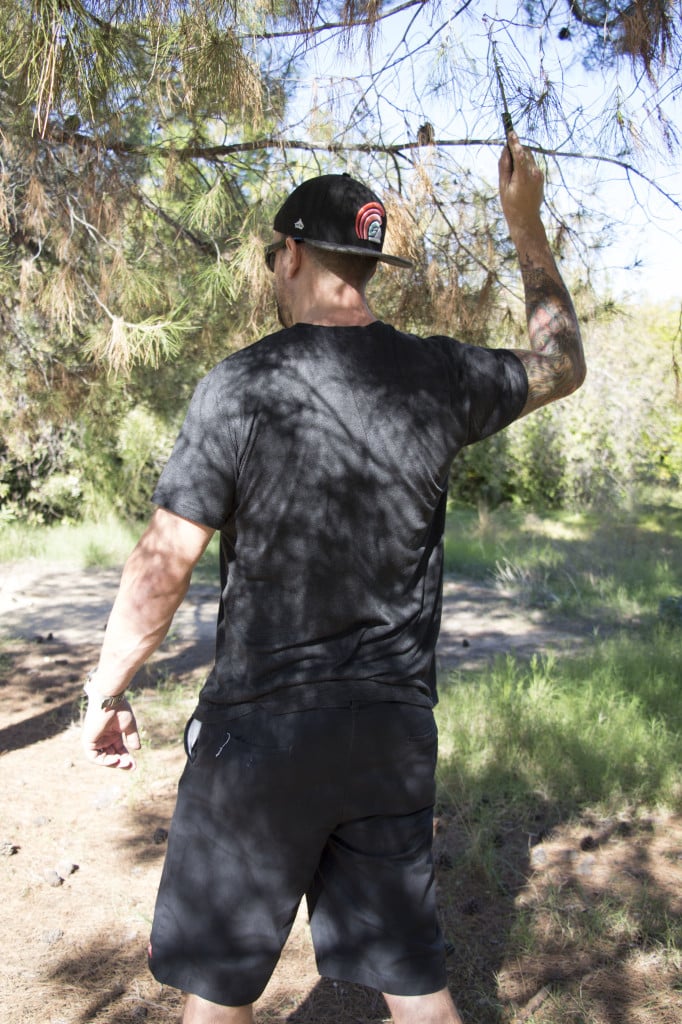 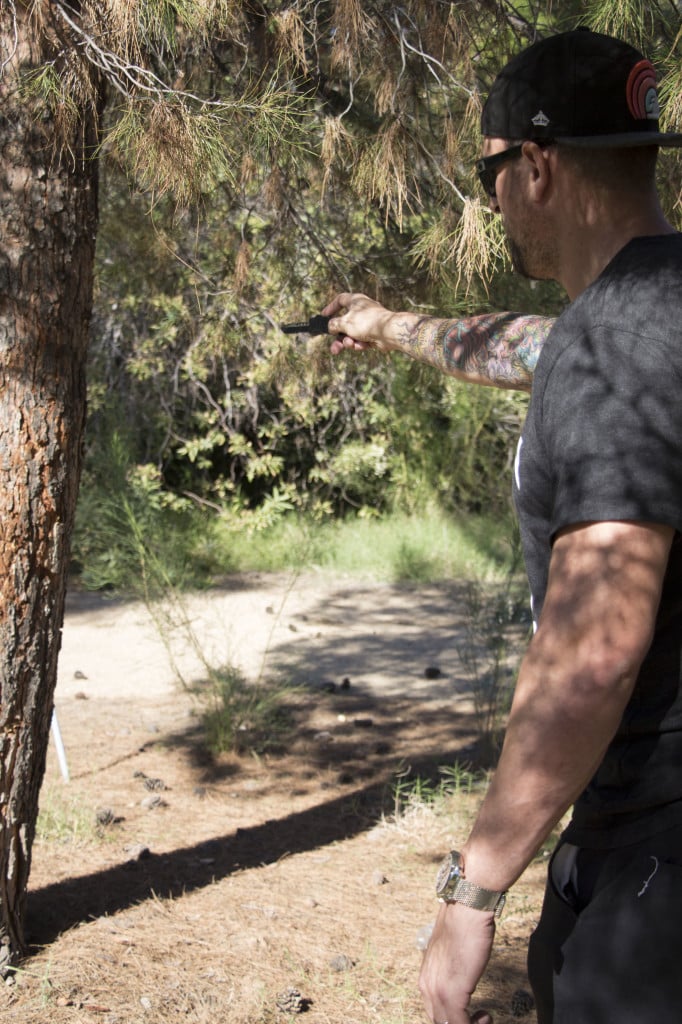 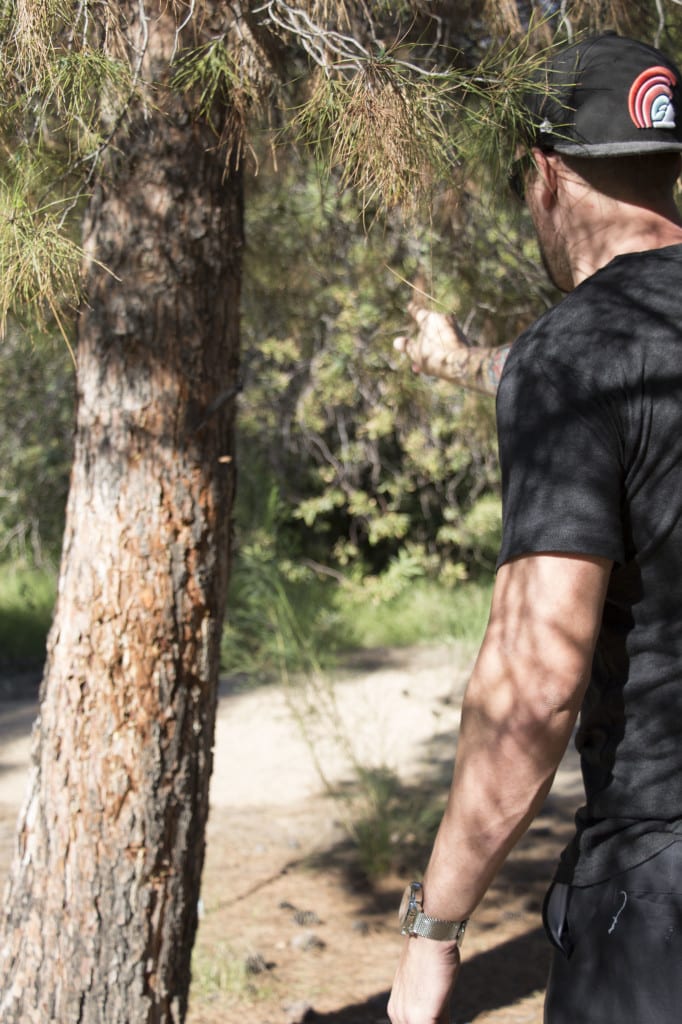 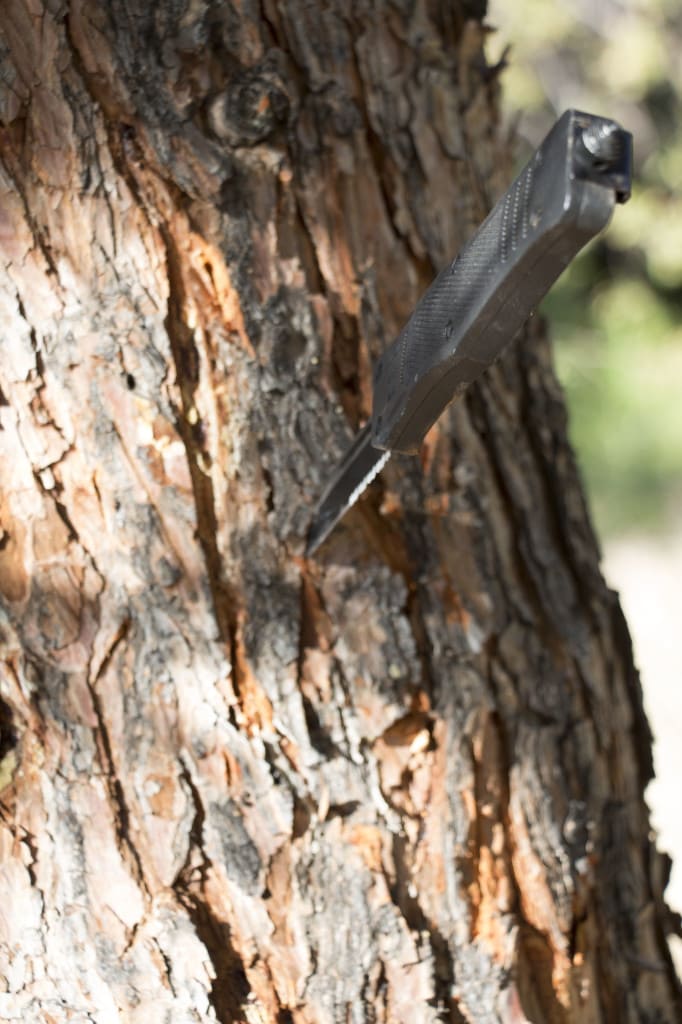 When you are done with throwing your OTF knife be sure to clean off any tree sap or debris from the blade so that there aren’t any restrictions to the blade travel. 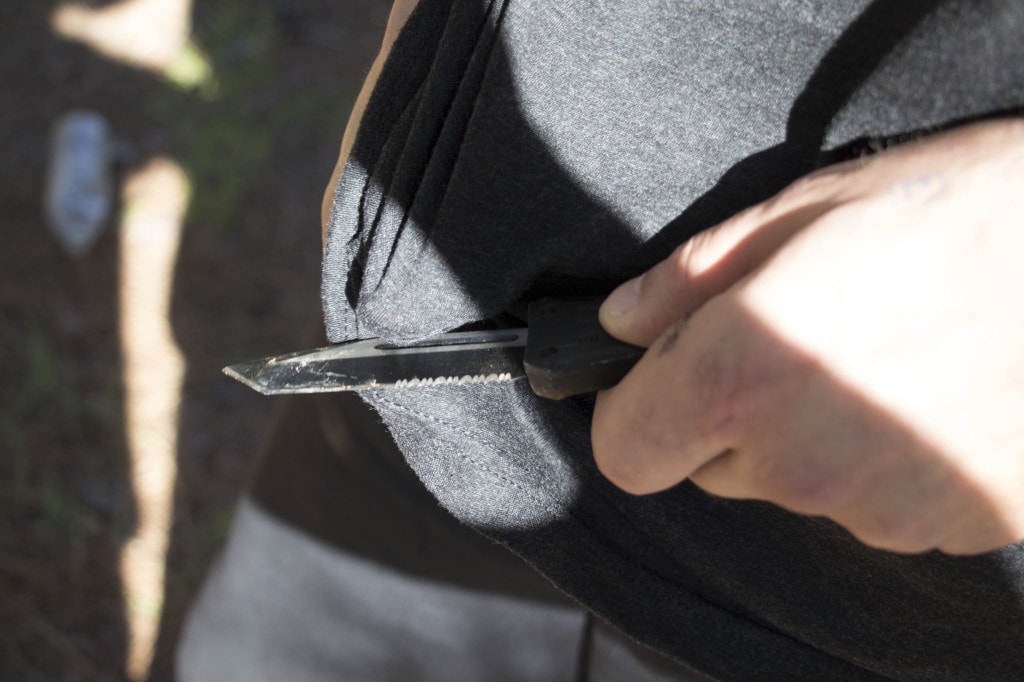 First and foremost, if you are going to try your hand at knife throwing be sure you are doing it safely. That means knowing your area and all those around you. The last thing you want to do is throw a knife where you aren’t supposed to, or you hurt someone who wasn’t expecting a knife being thrown.

Once you find that secure and safe area for your knife throwing, we recommend standing as close to your target as needed to get a strike. That is, don’t start by standing 10 ft away from your target if this is your first time attempting to throw a knife. Instead, start 2 ft away and perform slow, methodical throws. These throws will build your muscle memory and your overall throwing mechanics. These throws will also build your confidence. Once you work out your mechanics at the close distance, then you can take a few steps back and try to throw again. Note, when you step back you will have to adjust the power you use to throw the knife. The farther back, the harder you have to throw. But the farther back, the more fun it is!

Here is a video of what this actually looked like in real time: 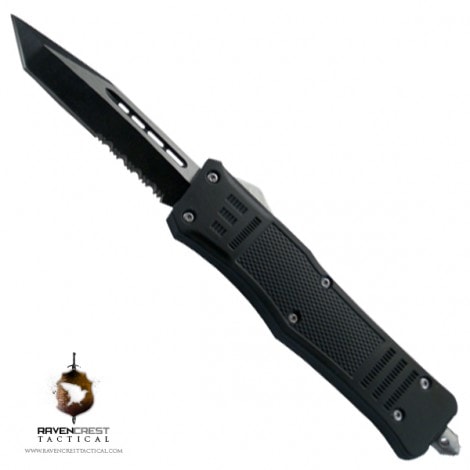