One side of this knife blade will have “Fallen Heroes” engraved on it. For the other side of the blade, we can engrave a name or badge # that is specific to you and your family. Please contact us for any further questions. Please allow us 2 – 3 business days if you are choosing to add badge #'s. Since you can choose what badge # is on your knife, we do not engrave these until they are ordered.

For full details on this knife and it's purpose please read the description below…. 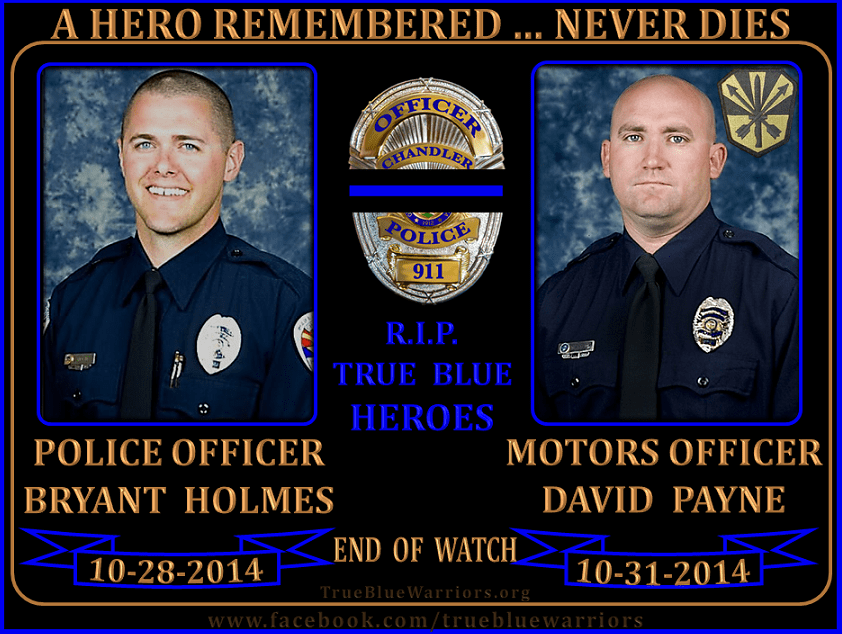 50% of every Fallen Hero knife will go directly to the families of these fallen officers. We will do this until the end of this year. For details on the memorial funds that we will be donating to, please read the following article taken from the “True Blue Warriors” Facebook page.

The Chandler Police Department lost two of their Officers In The Line Of Duty this week. We felt compelled to Honor both Officers together as they mirrored each other in so many ways not just as fine and Noble Public Servants but as wonderful human beings as well. Please take a moment to read of how these Heroes LIVED:

Police Officer Bryant Holmes, 34, was struck and killed by a red-light runner. Police Motors Officer David Payne, 37, was struck and killed by a (hit-run) drunk driver (details below). Born with a soul that has Courage to wear the Badge, Ofc. Holmes had been Saving, Serving, and Protecting the People for 5 years, while Ofc. Payne had been for 7 years.

Ofc. Holmes was well-liked and respected by not only his fellow Officers but the community as well. Brother Bryant made it a point to make himself visible while on his patrol duties and took time to stop and speak with residents. He knew many by their first names and treated them as friends. Ofc. Holmes was incredibly respectful, always smiling, and made sure the residents knew he was there for them to help them in whatever their needs or concerns may be.

When on a call his fellow Officers loved having him on scene because they knew that no matter how potentially volatile a situation may turn, it was Ofc. Holmes’ keen sense of people and he was an amazing intuitive problem solver. His people skills were incredible. And when things did become hot, his fellow Officers knew Brother Bryant had their six covered at all times, paying attention to the surroundings, keeping everyone safe, including the residents. Even upon an arrest, Ofc. Holmes did so with care, representing us all in the finest of fashion.

Ofc. Payne began his career in Law Enforcement as a detention officer. He excelled and soon moved to patrol duties. Brother David studied endlessly, worked tirelessly, and trained with enthusiasm because he wanted to do it all. Ofc. Payne became a certified drug recognition expert and FTO.

But there was one more passion he had inside him that never subsided and the moment he had the chance he went for it with everything he had and finally realized his dream – being a Motors Officer. His ever-present smile became even bigger on this day and it never subsided. He loved this unit, his fellow motors officers, and the work it entailed.

Ofc. Payne was dedicated to DUI enforcement and though he was the toughest as they come out there, he was also incredibly respectful and treated all with dignity and humanity. When he had to issue citations or even make an arrest, Ofc. Payne took great pains to ensure one understood why he was doing what he had to do by explaining and teaching along the way. He gave you something to think about but he did it without making you feel ‘less than human’. Even before he began his Motors assignment, Ofc. Payne led his squad in the most DUI arrests. His commitment, dedication, and perseverance was unwavering and he helped save so many lives.

Officer Payne was also an active serving member of the Arizona Army National Guard. He began serving our beloved country and her People in 1998. Brother David started out as a vehicle mechanic in a field artillery unit. he later found himself serving in Operation Iraqi Freedom from 2007-2008. He was currently assigned to the Arizona Medical Command in Phoenix serving with the rank of Army Staff Sergeant.

When not in uniform, both of our Brothers loved nothing more than spending quality time with their children, family, and closest of friends. They were both very caring, nurturing, and warm-hearted gentlemen, always ready to lend a hand or an ear to whomever needed, no questions asked. Both also had a wonderful sense of humor and enjoyed making people smile.

Ofc. Holmes and Ofc. Payne served every day with Courage and with Compassion, Fearlessly and with Fairness. These Brave and Benevolent Sons, a Husband, Fathers, and Brothers of Blue simply wanted to make a difference in their small corners of the world. May we take a part of Brother Bryant’s and Brother David’s legacies with us when we enter into our daily arenas as we continue to create our own. We must also all come together to help raise their children and make an effort to keep their daddies memories alive so they always know how much these Heroes were loved and how they both Lived As Only A Hero Could.

On 28 October 2014, Ofc. Holmes was at the Police Station and had headed home before heading back to begin his night shift. He was in uniform heading to work on his motorcycle, traveling northbound on Recker Road in Gilbert. He went to turn left onto Baseline Road when he was struck by a Jeep Cherokee traveling west on Baseline. It was later learned the driver of the Jeep had a red light when the collision occurred. The driver (who showed no signs of impairment) and his passengers remained on scene and were cooperative with the Police.

Sadly, and with heavy heart, this proved to be our Brother’s final battle … Police Officer Bryant Holmes succumbed to his injuries and was pronounced on scene.

On 31 October 2014, Ofc. Payne was on patrol on his department issued motorcycle at 0040hours. While stopped at a red light at the intersection of Chandler and Pennington, he was rear-ended by vehicle. The impact threw Ofc. Payne quite some distance from his bike. The driver took off but stopped a half mile away. He was found to have his 11 month old child in the vehicle at the time of the collision. The child was not injured and the driver was taken into custody. Preliminary investigation reveals the driver believed to be impaired at time of crash.

Brother David was transported to the hospital in dire condition. Sadly, and with heavy heart, this proved to be his final battle … Motors Officer David Payne succumbed to his injuries and was pronounced less than 30 minutes later.

Bryant leaves behind his beloved bride and four children (all under 10 years of age). David leaves behind his 11 year old daughter and his beloved girlfriend who is expecting their baby to be born in January. Both leave behind their parents. Our heartfelt thoughts and prayers go out to both the entire Holmes and Payne families, the Men and Women of the Chandler PD and the Gilbert PD, all the responders who showed on both scenes, the residents of Chandler who lost two amazing faithful servants, and to all whom have had the pleasure and the privilege of knowing and working along side this True Blue Hero.

Our Brothers, as you now patrol the streets of Heaven may you continue your vigilant watch over us all as we carry on In Our Brothers’ Honor. We thank you both for your service and for your sacrifices. We thank you for your lives. Job Well Done Sirs.

Rest In Peace Police Officer Bryant Holmes and Police Motors Officer David Payne … We Have The Watch From Here. SALUTE!

Twelve years ago, another Chandler Police officer was killed at the intersection where Ofc. Payne was killed Friday. On June 12, 2002, CPD Police Officer Rob Nielsen was responding to a vehicle crash when a turning vehicle hit his patrol car. The fuel tank ruptured, and his car burst into flames

Donation information for both Officers: any branch office of Arizona Bank & Trust.

(we will update his services information once finalized)

The National Guard is holding a memorial service for Officer David Payne on Sunday, November 2, 2014 at their facility located at 5636 E. McDowell Rd. in Phoenix. The time of the service is 11:00 am. All are welcome to attend.

A public viewing for Ofc. Holmes has been scheduled from 5:00PM to 8:00PM on Sunday November 2, 2014 at the Church of Jesus Christ of Latter-Day Saints Stake Center, located at 3025 S. Hawes Road, Mesa, Arizona 85212. Services will be held at this location Monday November 3, 2014 at 11:00AM. Graveside services will be held at Valley of the Sun Cemetery located at 10940 E. Chandler Heights Road in Chandler. **please note a change in procession route: The route for Officer Bryant Holmes’ funeral procession will travel southbound on McQueen Road from the San Tan Freeway to Chandler Heights Road, then west on Chandler Heights Road to the Valley of the Sun Cemetery**

Ofc. Holmes Suspect, 20, face a charge of one count of causing serious physical injury or death by a moving violation

Ofc. Payne Suspect, 31, in custody on suspicion of manslaughter, hit-and-run, and endangerment – was driving on a license that was suspended since 2010 for previous DUIs – has a history of drunk driving and other offenses. The very thing Officer Payne worked so hard to prevent.

The RCT-1 Raven Double Action OTF Knife features a 440c Stainless Steel blade with a two tone matte black finish. The Tanto Blade can be quickly deployed with the ambidextrous sliding button. Pushing forward on the button deploys the blade out the front of the handle and pressing backwards on the button retracts the blade back into the handle where it is ready again to be deployed at a moments notice. The 3.9″ Tanto blade comes with an aggressive partially serrated edge giving you tearing and cutting power making it a great all purpose blade. The Tanto blade is exceptional at both piercing and slicing due to its angular shape and tapered spine which creates a strong point. The Zinc Alloy is “rubberized” and patterned for non-slip handling in any environment. The metal pocket clip is reversible and can be carried in the button back or button front positions. When clipped into the pocket it has a nice low profile “ride”. The end of the knife features a glass breaker pommel designed to shatter glass or break anything else you might need to in case of an emergency. All RCT OTF Knives have a safety feature that will not allow the blade to fully deploy if anything is obstructing it’s path. The blade will then need to be reset by pulling the blade all the way into its locking position making it again fully functional. 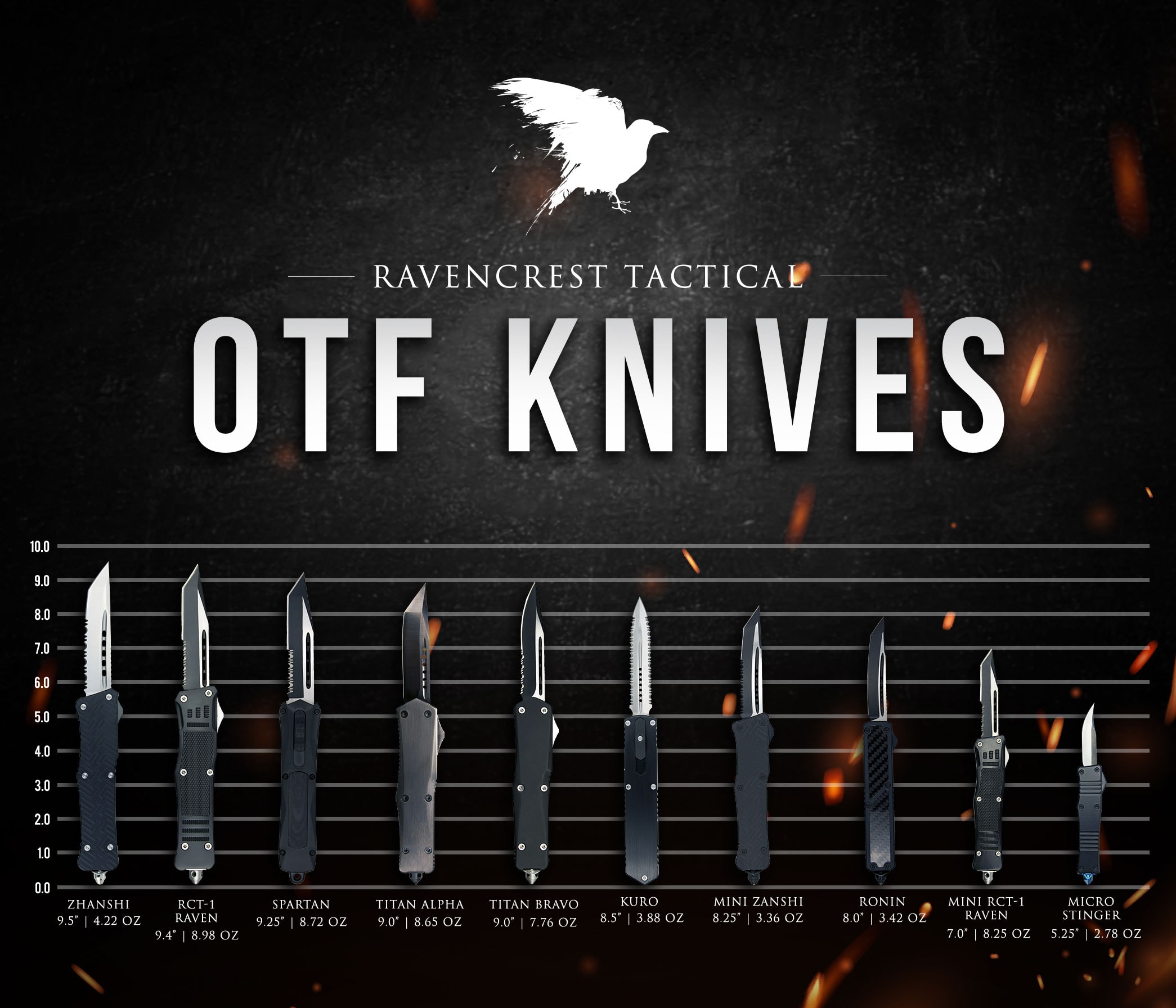